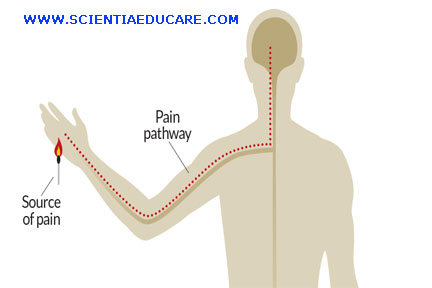 Rare changes in a certain gene can prevent a baby from developing the particular nerves designed to carry signals for pain (example depicted as red dotted line). Affected people will not feel pain, even when injured by bangs, scrapes, burns or more.

Naturally occurring changes in a previously unstudied gene can prevent people from experiencing pain. And that’s not good. It can leave them dangerously unaware of harm.

Researchers presented the finding May 25 in Nature Genetics.

The gene’s name is PRDM12. Pain is the body’s way of signaling that something is wrong. Certainmutations — naturally occurring changes — in that gene keep people from feeling pain. Robbed of this warning, affected people may fail to protect themselves from unintentional injuries. Such injuries could range from skin burns or scratched eyes to missing digits.

However, there is some good news in the finding. Better understanding of how a mutated PRDM12 gene blocks pain might one day lead to better treatments for people who suffer from too much pain.

“It’s promising, but there’s a long way to go,” says Simon Halegoua. He’s a neuroscientist at Stony Brook University in New York who did not work on the new study.