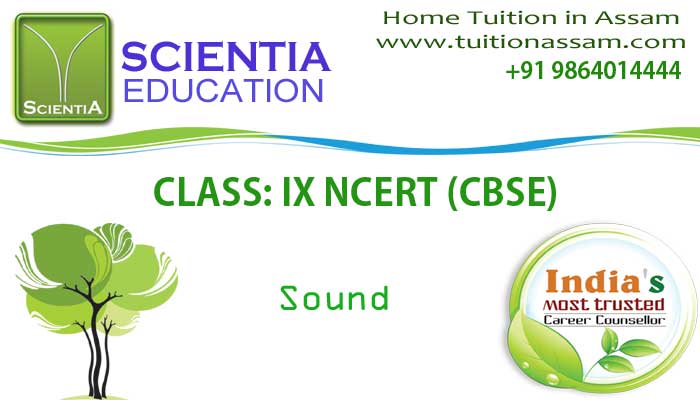  Like heat and light, sound is also a form of energy which has a characteristic of giving the sensation of hearing.

 Sound is produced by vibrating bodies. It propagates in air, in the form of longitudinal waves that comprise of compressions and rarefactions unlike the waves on a water surface, which transverse in nature.

 The vibrations of a body cause the surrounding layers of air to vibrate to and fro, which cause these compressions and rarefactions. As sound requires a medium for propagation, it is a mechanical wave.

 Some of the properties of sound consist of its wavelength, frequency, amplitude and speed.

 Time period is the time taken by a particle to undergo one compression and the succeeding rarefaction.

 Frequency is the number of vibrations made by a particle in one second, which is generally referred to as pitch.

 The loudness of sound depends on the amplitude of the vibrating particles.
One can differentiate between two sounds by characteristics such as quality, pitch and loudness.

 The reflected sound is referred to as an echo. When we produce sound before a reflector, whether we hear the echo or not depends on the speed of the sound in the medium and the distance between the source/observer (which is the same in this case) and the reflector. To perceive two sounds they should have a time gap of at least 0.1 second.

 In a closed enclosure, one can hear multiple sounds (echoes) even after the source of sound stops producing the sound due to multiple reflections at different points on the surfaces of the enclosure. This phenomenon is called reverberation.

 Reflection of sound is used in various applications like stethoscope, echocardiography, sonar etc, although ultrasonics is used for things with a frequency greater than that of the audible range.

The sounds whose frequency is less than 20 Hz are infrasonics, and greater than 20 kHz are ultrasonics.

 The human ear, that helps us hear sound, consists of three parts called the outer ear, middle ear and the inner ear.

In case of hearing difficulties, one uses hearing aids that consist of a microphone and an amplifier.