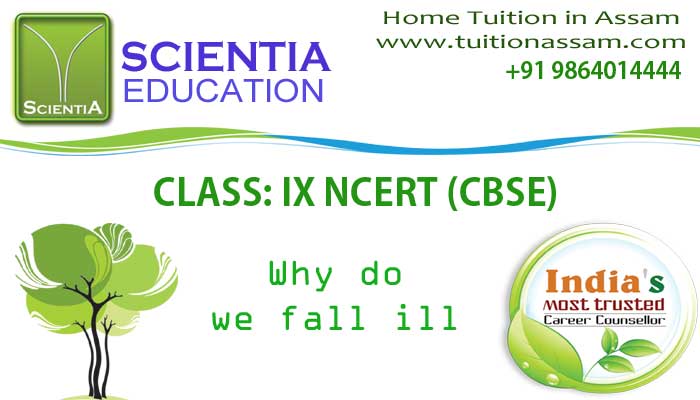 CLASS: IX NCERT (CBSE)
Why do we fall ill

 Health is defined as a state of physical, mental and social well being.

 A disease is an unhealthy condition caused by microorganisms, improper diet or it may be inherited.

 Classification of diseases is based on prevalence, occurrence or spread and duration.

 Epidemics are outbreak diseases that attack many people at the same time and spread very quickly.

 Classification of diseases based on occurrence or spread includes Infectious and Non-Infectious Diseases.

 Classification of diseases based on duration includes acute and chronic diseases.

 Causes of diseases might be due to contaminated water, lack of good nourishment and genetic abnormalities.

 Diseases caused by protozoa are Kala-Azar and Sleeping Sickness.

 Diseases caused by worms are intestinal infections and lymphatic infections like elephantiasis.

 Organ and Tissue specific Manifestations of microbes depends on the mode of entry of microbes. Acquired Immuno Deficiency Syndrome or AIDS is so called because the AIDS virus breaks down the body’s immune cells and organs that comprise the immune system.

 Common ways of transmission of diseases includes direct contact, air, water, food and other animals. Overcrowded and poorly ventilated housing is a main factor in the spread of airborne diseases.

 Syphilis and AIDS are diseases caused by physical contact.

 Organisms that carry microbes from a sick person to a healthy person are called vectors. Rabies and malaria are diseases caused by animals.

 Treatment of infectious diseases involves either reducing the effects of the disease or eliminate the cause of the disease. Antibiotics are more effective against bacterial infections.

 Person infected with chicken pox won’t get the disease again, because of our body cells that react against microbes and remember by producing memory cells.

 Immunization is the protection of individuals from communicable diseases by administration of a suspension of killed micro-organisms.

 A hundred years ago, smallpox epidemics were common throughout the world. Virus like smallpox was eliminated from the world through vaccines, a process called vaccinations.