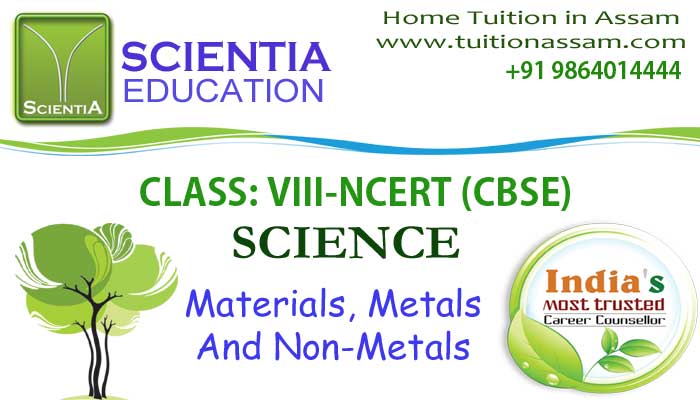 Sodium and potassium are soft metals that can be cut with a knife. Mercury is a liquid metal.

The metal base in an electric iron is for conducting heat, not electricity. Metals are very good conductors of heat, too. That’s why cooking utensils, irons, heaters, etc. are all made of metals.

Metals can be easily shaped into wires. This property of metals is called ductility.

Metals can be easily shaped into thin flat sheets. This characteristic of metals is called malleability.

Metals make a sound when struck with hard objects. Metals can be polished to a shiny appearance. That’s why gold and silver jewellery shine so much.

Iron reacts with atmospheric oxygen and moisture to form iron oxide, which is commonly known as rust.Metals burn in the presence of oxygen to form metal oxides, which are basic in nature.
For example, if you burn a strip of magnesium, magnesium will burn in oxygen to form magnesium oxide.

Magnesium oxide dissolves in water to formmagnesium hydroxide, which is basic in nature.

When a copper vessel is exposed to moist air, a green coating forms on its surface. The coating is a mixture ofcopper hydroxide and copper carbonate.

Nails rust because of the moisture present in air.

Sodium reacts vigorously with water and oxygen, and produces so much heat that it catches fire! That’s why sodium is stored in kerosene – to prevent it from coming into contact with moisture and oxygen.

Metals react with acids, such as hydrochloric acid andsulphuric acid, to give out hydrogen gas.

Copper does not react with dilute hydrochloric acideven on heating, but it reacts with dilute sulphuric acidon heating.

Metals react with bases, such as sodium hydroxide, to produce hydrogen gas.

More reactive metals can displace the less reactivemetals in a compound.

Non-metals exist in all the three states.

Silicon and carbon are solids; bromine is a liquid;chlorine, fluorine and oxygen are gases.

Non-metals are non-lustrous, non-malleable and not ductile, except for carbon fibres, which are ductile. Non-metals do not produce any sound when hit, which means they are not sonorous.

Non-metals do not conduct heat and electricity, except for graphite.

Non-metals react with oxygen and form acidic or neutral oxides.
For example, sulphur reacts with oxygen to form sulphur dioxide, which is acidic.

Phosphorus is a very reactive non-metal. It catches fireif exposed to air. To prevent the contact of phosphoruswith atmospheric oxygen, it is stored in water.

Non-metals do not react with acids.

The reaction of non-metals with bases is complex.
For example, when chlorine reacts with a base like sodium hydroxide, it gives multiple products like sodium hypochlorite, sodium chloride and water.