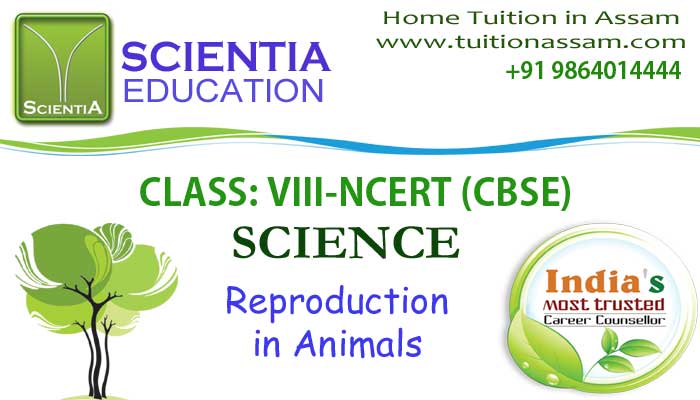 Amoeba and bacteria adopt the asexual mode of reproduction.Reproductive organs in humans producegametes – eggs and sperms.A zygote is formed by the fusion of an egg and a sperm.The male reproductive organs include a pair of testes, two sperm ducts, and apenis.Sperms have a head, a middle piece and atail.

The nuclei of the sperm and the egg fuse to form a zygote, and the process is called fertilisation.An organism inheritssome characteristics from the egg and some from the sperm.Copulation is the act in which a male reproductive organ enters the female reproductive tract.

The zygote divides repeatedly to form a ball of cells, which, in turn, develops into tissues andorgans of the body.The development of the embryotakes place in the mother’s uterine wall.All parts of the body start developing in an embryo, called foetus.

The chick hatches from the egg after three weeks.There are three distinct stages in the life cycle of a frog – egg, tadpole and adult.In the first stage, the egg fuses with a sperm to form a zygote. The zygote further divides to form an early tadpole, which matures into a late tadpole.During metamorphosis, the larvatransforms into an adult frog.Our bodies undergo certain changes as we develop from childhood toadolescence stage.

In asexual reproduction, only one parent is involved.Binary fission involves the splitting of an organism into two.Amoeba is a simple, unicellular organism.Reproduction in amoeba begins with thedivision of the nucleus.The parent organism divides into two individual organisms is fragmentation or binary fission.Bulges that appear as outgrowths on hydra are called buds. These buds separate as new individuals, called budding.Dolly was the first cloned mammal, and is genetically identical to its parent sheep.

Cloning is creating an exact copy of a biological entity.Aclone is created by inserting the complete genetic material of a regular body cell from a donor into arecipient.Sheep are viviparous animals, and sopropagate their offspring sexually.Sir Ian Wilmut fromRoslin Institute in Edinburgh, Scotland created Dolly.

A mammary gland cell of the Finn Dorsett sheep species and an enucleated cell of the Scottish Blackface ewe were subjected to an electric pulse to cause fusion, thereby resulting in a fertilised egg that developed into a zygote.The embryo was implanted into the uterus of the ewe to undergo rapid cell division to form a foetus.Offspring inherit characteristics from both the parents.Dolly received all the genetic information from the Finn Dorsett sheep.