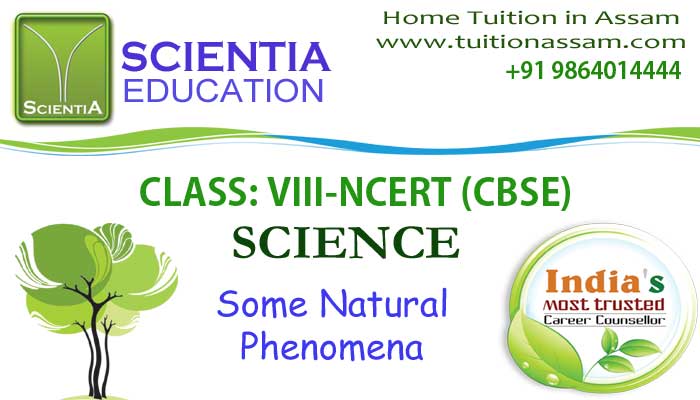 Lightning is a natural phenomenon that has fascinated people for ages. Several people thought and researched about the cause of lightning and its process. Benjamin Franklin discovered that there is an electric discharge between clouds that produces a spark, and it is the electric spark between the clouds and the earth that appears as lightning. His famous kite experiment proved this fact.

As the amount of charge increases, the negative charge on the cloud tends to make a path towards the ground, and it results in a narrow streak of electrical discharge, which we call lightning.

An electroscope is a device that detects the type of charge on a body. Like charges repel and unlike charges attract each other. This is used in an electroscope. An electroscope consists of a glass jar fitted with a cork lid and a metallic wire passing through it. There are two metallic strips at the bottom of the wire.

The upper end of the wire is connected to a metal disc. A body that is positively charged is touched to the metal disc, so that the charge is transferred to the metal strips through the wire, and they diverge from each other on gaining a like charge. Now, if a negatively charged object is brought into contact with the disc, the strips converge towards each other, indicating the unlike charge on the body.

Similarly, if a positively charged body is brought in contact with the metal disc, the divergence of the metal strips increases, indicating the like charge on the body. If the metal disc of the electroscope is touched with the hand, it loses its charge to the ground by transfer of charge through the human body. This is called earthing.

Lightning is caused due to the heavy electric discharge from the clouds to the earth. If lightning is not controlled, it can cause heavy damage to life and property. Hence,protective measures are of utmost importance during lightning strikes. Interiors of buildings are safe places to protect ourselves from lightning strikes.

Taking shelter in interiors and not staying in open areas is one of the best measures you can take. You should not take shelter under trees when in the open, or go to an open area if outside. If you are in a vehicle, you should not come out of it; you should also close the doors and windows of the vehicle.

Tall buildings are provided with lightning rods. A lightning rod a metal rod that is erected at the top of a building. It is connected to a thick metallic plate, made of a good conducting material like copper and buried under the earth, through a thick copper wire.

If lightning is likely to strike the building, it is attracted by the lightning rod, and the electrical discharge is transferred through the wire to the ground. Thus, it keeps the building safe.

A natural phenomenon that cannot be predicted is anearthquake. The earth consists of three major layers, called the crust, the mantle and the core. The core is further divided into the inner core and the outer core. The mantle consists of semi-solid material above which the crust floats.

The place in the interior of the earth where an earthquake occurs is the focus, and the region on the surface of the earth that is the closest to focus is likely to experience the largest damage. This region is called the epicentre of the earthquake.