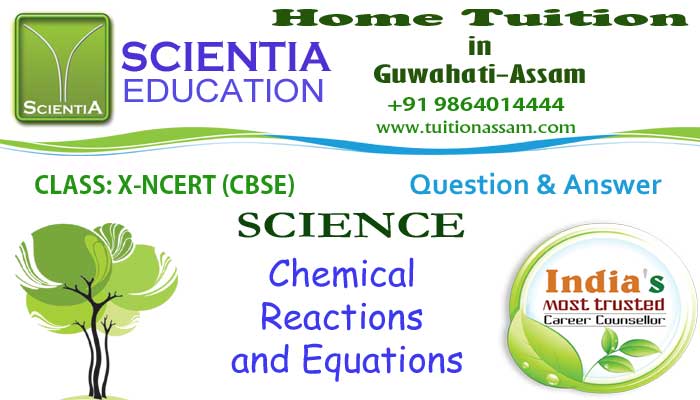 Answer: A chemical change is a permanent, not easily reversible change in which the identity of the substance is altered to produce one or more new substances.

Question 2:Give four examples of a chemical change.
Answer:
1) Burning of coal.
2) Rusting of iron.
3) Photosynthesis in plants.
4) Electrolysis of water into hydrogen and oxygen.

3) Chemical – New substances are formed and the original substances cannot be re-obtained.

5) Chemical – New substance with new properties is produced. Unclotted blood cannot be reobtained in this change.

Question 7:Give four examples of a physical change.
Answer:
1) Evaporation of water.
2) Formation of dew.
3) Crystallisation of sugar from its solution.
4) Ringing of an electric bell.

Question 10:Explain whether the following are physical or chemical changes. Give one reason for your answer.
1) Formation of curd
2) Ripening of fruit
3) Bending a glass tube by heating
4) Melting of wax
5) Formation of wine
Answer:
1) Chemical change
New substance (curd) with a different composition is formed from the milk. Milk cannot be reobtained. Hence the change is permanent.

2) Chemical change
The property of the substance has changed. The hard, sour fruit has changed to a soft, sweet form. The change is permanent.

3) Physical change
The physical properties changed on heating, but there was no change in mass.

4) Physical change
On heating the wax melts but on cooling it re-solidifies. So there is no change in properties or composition. The change is temporary and reversible.

5) A chemical change
The properties of the substance changed and new substance like alcohol is produced. The change is permanent and irreversible.

Question 11:Action of heat on blue vitriol is a physical as well as chemical change. Justify.
Answer: When blue vitriol is a gradually heated, it undergoes a physical change to form a white powder. On adding a drop of water to the white powder, it changes back to blue. Thus the change is a physical change.
On strongly heating to about 800oC, copper sulphate decomposes to give new substances like copper oxide and sulphur dioxide. On cooling these, copper sulphate cannot be re-obtained. Thus it is a chemical change.

Question 12:Is boiling of water, a chemical change? Give reasons for your answer.
Answer: Boiling of water is not a chemical change it is a physical change. When water boils, it absorbs heat energy and changes to stream. But this change is temporary and reversible. The steam can change back to water by giving out the same amount of heat. Also the mass of water boiling is equal to the mass of steam that is formed. Accordingly, it is a physical change.

Question 13:A person eats chocolate and then digests it. In doing so a physical and a chemical change takes place. Identify the changes and give reasons for your answer.
Answer: When the person chews the chocolate and breaks it into smaller pieces – it is a physical change. No new substances have been formed as yet. Once acted upon by saliva and other digestive juices, the chocolate is broken down into other simpler substances, which can be absorbed by the blood. This is a chemical change.

Question 17:Explain whether the addition of dilute sulphuric acid to iron is a physical or chemical change.
Answer: It is a chemical change for the following reasons:

1) Iron reacts with dilute H2SO4 to form ferrous sulphate (a pale green solution) and liberates bubbles of hydrogen gas. New products are formed and the change is permanent.

2) Heat energy is evolved in the reaction i.e., it is an exothermic change.

1) The vapours formed settle on the cooler parts of the test tube as solid – so the change is temporary and reversible.

2) There is no change in mass.

3) There is no energy (heat) change involved because the heat absorbed when the solid iodine changes to vapour, is given out when the vapour changes back to solid.

4) The chemical composition of the solid is same as that of the vapour.

Question 19: Burning of a candle may be considered as showing physical and chemical changes occurring simultaneously. Explain.
Answer: When the candle burns, the heated wax melts. The melted wax re-solidifies and no new substance is formed, therefore this is a physical change. However, the wax and the wick continue to burn and produce new substances like carbon dioxide and water vapour. This burning process is a chemical change as it is a permanent change. Also, energy in the form of heat and light is evolved.

1) The nature of reactants and the products of the chemical change.

4) The actual result of the chemical change.

Question 22:What information does the following equation convey?

Answer: The above equation tells us that,

1) One molecule of calcium carbonate reacts with two molecules of hydrochloric acid to produce one molecule each of calcium chloride, water and carbon dioxide.

2) Adding individual atomic weights (in grams), the total mass of a compound can be calculated. Thus, 100 grams of calcium carbonate reacts with 73 g of hydrochloric acid to produce 111g of calcium chloride, 18g of water and 44g of carbon dioxide.

2) Electrolytic decomposition is the breaking down of substances into simpler substances by electricity.

Question 25:What type of reaction is this? Why is it called so?
Answer: This is a neutralisation reaction. The hydrogen ion (H+) of the acid reacts with the hydroxyl ion (OH-) of the alkali to form water. Neutralisation of acid with base takes place.

Question 31:State what type of reaction the following are:
1) Splitting of water into hydrogen and oxygen.
2) Burning of hydrogen in air.
3) Action of iron with copper sulphate solution.
4) Action of heat on calcium carbonate.
5) Treating silver nitrate with hydrochloric acid. Give equations with your answer.
Answer:
1) Electrolytic decomposition reaction

Question 32:When ice is exposed to air, it melts to form water and when hydrogen in burnt in air, it forms water. How do these changes differ?
Answer: Ice melting to form water is a physical change. No new substance is formed in this process and the mass of the melting ice is equal to the mass of water formed. However, burning hydrogen in air is a chemical change as a new substance i.e., water is formed. This change is a permanent change.

Question 33: Blue Copper Nitrate crystals turns black when heated. Explain
Answer: Copper nitrate crystals decompose into copper oxide, nitrogen dioxide and oxygen on heating. The latter two are gases and escape into the surroundings. The residue left is of copper oxide, which is black in colour.

Question 41:What do you observe when concentrated sulphuric acid is added to sugar?
Answer: The sugar changes into a black spongy mass of carbon, which swells up. The sulphuric acid acts as a dehydrating agent removing all the water molecules from sugar.

Question 43:What do you observe when trilead tetraoxide is heated?
Answer: On heating, the red powder of trilead tetraoxide decomposes and produces a colourless gas. As this gas can rekindle a glowing splinter, it is oxygen. The residue left behind is orange-brown when hot but changes to yellow on cooling and fuses with the glass.

Question 45:Why is the reaction between steam and red hot iron said to be a reversible reaction?
Answer: If steam is passed over red hot iron, it is converted into its magnetic oxide and hydrogen gas. If on the other hand, hydrogen is passed over heated magnetic oxide, it will change back to iron and steam. This reaction can be made to proceed in both directions, so it is called reversible reaction.