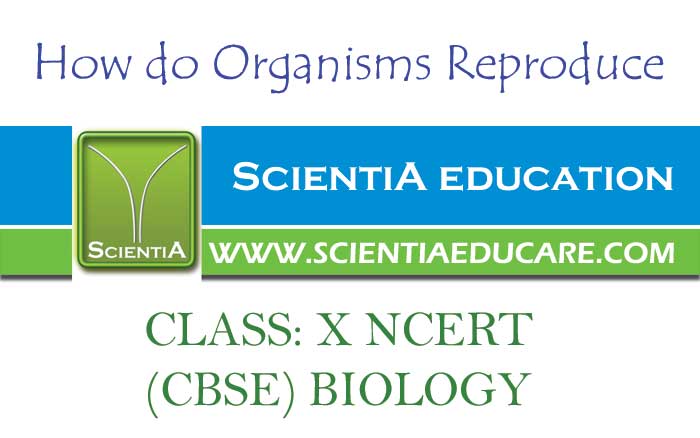 • Reproduction is defined as the production of individuals of the same species, that is the next generation of the species.
• There are basically two types of reproduction – asexual and sexual.
• Asexual reproduction involves only one parent and the offspring is genetically similar to the parent. Sexual reproduction involves two parents and the offspring has a fusion of the characteristics of both the parents.
• The different types of asexual reproduction are fission, budding, fragmentation, spore formation and vegetative propagation.
• Fission occurs in lower plants and animals in which the cell divides two or more times to form daughter cells.
• Budding occurs in fungi like yeast and animals like hydra. In this process, the parent cell or body produces a lateral outgrowth called bud. This bud grows into a separate individual.
• Spore formation is generally seen in bacteria and most fungi. The spores also help in tiding over unfavourable conditions as they are covered with a thick wall.
• Fragmentation takes place in some lower plants and animals such as some worms. The mature organism breaks up into two or more pieces or fragments. The fragments then grow into complete organisms.
• Regeneration of new plants from the vegetative parts of the parent plant is called vegetative propagation or vegetative reproduction.
• Natural vegetative propagation is of different types depending on the organ used – stem, root or leaf.
• Tissue culture is a modern technique used to produce plants from a bit of tissue taken from any part of the plant. The tissue is first grown in test-tubes and when all the tissues are developed, the plant is transferred to soil. It is a technique that gives virus-free plants.
• There are both advantages and disadvantages of vegetative propagation. The main advantage is that desirable traits can be retained. However, the traits cannot be retained for many generations as the plants lose their vigour and become prone to diseases.
• Sexual reproduction mostly occurs in higher multicellular plants and animals. However, it is also seen in lower organisms like the bacteria, Spirogyra (an alga) and Paramoecium (a protozoan). Bacteria show a primitive type of sexual reproduction called genetic recombination.
• Sexual reproduction involves the fusion of male gamete with the female gamete in a process called fertilisation. This results in the formation of diploid zygote that has the characteristics of both the male and the female parents. The zygote then grows into an embryo by mitotic divisions. The embryo by further growth and differentiation results in the formation of a young adult.
• The plants that sexually reproduce have the reproductive structures called the flowers.
• Androecium is the male reproductive part of the flower. The individual units of androecium are called the stamens. Stamens have four-lobed anthers that produce the male gametes within the pollen grains.
• Gynoecium is the female reproductive part of the flower. The individual units are called the carpels or pistils. Each carpel bears many ovules each of which contain one egg, the female gamete. Each ovule bears the embryo sac that contains the egg and the polar nuclei in addition to other structures.
• Transfer of pollen grains to the stigma is called pollination. Pollination may be self-pollination or cross-pollination.
• Fertilisation in plants is called double fertilisation as one male nucleus fuses with the egg and the second fuses with the primary endosperm nucleus.

• The divisions of the endosperm nucleus result in the formation of the endosperm that nourishes the growing embryo. The ovule then becomes the seed and the ovary changes into fruit.
• Sexual reproduction is seen in nearly all animals. In animals reproduction involves production of gametes that are haploid cells. The gametes may be similar – isogametes or heterogametes.
• In multicellular organisms, the male gametes called the sperms are produced by the male reproductive part and the female gametes called the eggs are produced by the female reproductive part.
• The male gamete of one individual fertilizes the female gamete of another individual to produce the zygote. The fertilisation may be external or internal.
• External fertilisation takes place in animals like the fish and frog where the fertilisation takes place in water, outside the body.
• In internal fertilisation the sperms are released into the body of the females during copulation. The resulting zygote develops into a young one. Thus mammals are viviparous, that is, they give birth to young ones.
• The human beings are bisexual with two separate sexes – male and female. The individuals of the two sexes show distinctive features called the secondary sexual characteristics.
• The reproductive system comprises of two different parts – Primary reproductive system that includes the gamete-producing organs, the testes and the ovaries. Accessory reproductive system that includes the glands, passages and other such associated structures.
• The male reproductive system comprises of a pair of testes, the duct system, associated glands and a mating organ, penis.
• Internally, the testis consists of a network of seminiferous tubules and the interstitial cells between the tubules. The seminiferous tubules produce sperms that are passed along the tubules to the posterior region of the testis. The interstitial cells are also called the Leydig cells and they secrete the hormone testosterone.
• The sperms pass through the vasa efferentia, epididymis, vas deferens and the urethra before being discharged outside. Along the way, they are mixed with secretions from the seminal vesicle, prostrate glands and Cowper’s glands.
• The female reproductive system consists of a pair of ovaries, a pair of oviducts, uterus, vagina and vulva. The main functions of the female reproductive system are to produce eggs, receive the sperms, provide the site for fertilisation, implantation of the growing embryo and development of the foetus. It also produces hormones that control the various stages of ovulation and maintenance of pregnancy.
• The stage when the reproductive system starts functioning is called puberty. In males, puberty sets in between 13 to 15 years and in females, it sets in by the age of 11 to 13 years.
• The onset of puberty in females is also marked by a monthly event called menstruation cycle. This involves preparation by the uterus for receiving the fertilized egg or the zygote.
• The implanted embryo is called the foetus that is attached to the uterus by an umbilical cord. The latter forms a connection between the placenta and the foetus. The placenta is the connection between the mother and the foetus to supply all its needs.
• The common sexually transmitted diseases that affect the reproductive system are the venereal diseases such as syphilis and gonorrhea and the disease affecting the immune system – AIDS. They can be avoided by using protective measures such as avoiding unsafe sex, sex with multiple partners, etc.
• The population explosion can be controlled with the methods of contraception or prevention of pregnancy. The contraceptive methods include use of condoms, diaphragm, IUD, having pills, etc. Pregnancies can be prevented by methods such as vasectomy and tubectomy, that involve surgical cutting of passages of gametes in males and females respectively.