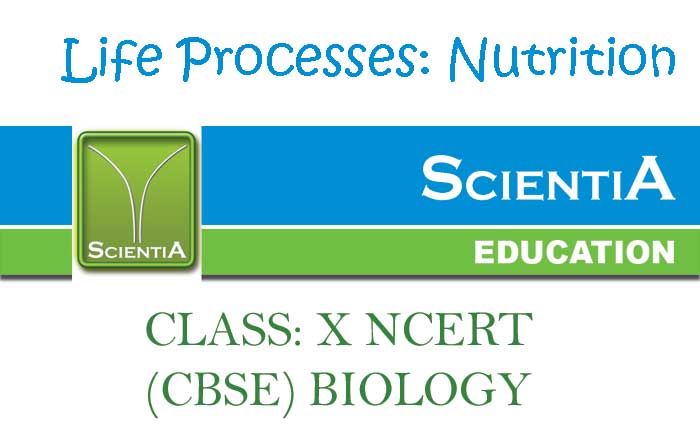 Nutrition can be defined as the process by which an organism obtains food that is used
to provide energy and materials for its life sustaining activities.

There are basically two modes of nutrition:

Organisms which synthesize their own food are called the autotrophs and the process is called autotrophic nutrition. They include all green plants and some bacteria such as the nitrifying bacteria.
Autotrophs are classified as:

1) Photoautotrophic: Organisms that synthesise, food with the help of the light energy of the sun, carbon dioxide and water by a process called photosynthesis are called photoautotrophic organisms.
For example: Cyanobacteria (blue-green bacteria, prokaryotes), algae and all green plants.
2) Chemotrophic: Organisms which synthesise food with the help of chemical energy are called chemotrophic organisms.
For example: Nitrifying bacteria such as Nitrobacter and Nitrosomonas, hydrogen bacteria and
iron bacteria.
Heterotrophic Nutrition
Heterotrophic nutrition is the process of obtaining the food from other organisms.
Heterotrophic nutrition is broadly classified as: holozoic, saprotrophic and symbiotic.
1) Holozoic nutrition involves the taking in of solid particles of food. It involves ingestion of food, its digestion, absorption and assimilation.
2) Saprotrophic nutrition is the process by which the organisms feed on dead and decaying matter. Examples of saprophytes are Rhizopus (bread mould), Mucor (pin mould), Yeast, Agaricus (mushroom), many bacteria etc.
3) Examples of saprozoans are Mastigamoeba and Chilomonas.
4) Symbiosis is the association of two dissimilar organisms. The association may be mutually beneficial (mutualism), benefiting one organism and harming another (parasitism) and benefiting one but having no effect on the other (commensalism).
5) Parasitism is defined as an association between individuals of two different species which is beneficial to one and generally harmful to another.
6) The different types of nutrition put the different organisms under three categories:
 Producers
 Consumers
 Decomposers
Photosynthesis:
Photosynthesis is the most important life sustaining process of nature.
It can be essentially summarised as follows:
Carbon dioxide + water Glucose + Oxygen
 In higher plants, the leaves along with the chloroplasts are considered the photosynthetic apparatus of the plant. Certain young regions may, however, contain chlorophyll. However, in the lower plants like algae, the entire plant body contains the pigments. The exchange of gases and uptake of water takes place through the general surface of the plant body.
 Factors affecting photosynthesis are light intensity, carbon dioxide concentration, temperature, chlorophyll concentration, water and pollution.
All animals are heterotrophic.
Holozoic nutrition is most common among all types / methods of heterotrophism.
Holozoic nutrition involves the following steps:
1. Ingestion – Taking in of food or eating
2. Digestion – breaking down food into simpler forms. Digestion is both mechanical and chemical. The digestion may take place outside cells (extracellular) or within the cells (intracellular).
3. Absorption – Taking in of food in the soluble forms into the tissues. The absorption may be passive (without the use of energy) or active (uses energy).
4. Assimilation – Utilisation of the nutrients for the various functions
5. Egestion – Removal of undigested or waste matter is called egestion

Nutrition in amoeba is holozoic. The food is ingested at the point where it comes in touch with the cell surface with the help of pseudopodia. Digestion in amoeba is intracellular and with the help of lysosomal enzymes. Since the food on digestion is converted into liquid diffusible form after digestion, it is readily absorbed by the cytoplasm. Then, it is circulated to all the parts of the cell and assimilated by building new materials. The undigested food is formed into faecal pellets and egested by exocytosis.

I. Mouth cavity consists of tongue and two rows of teeth. Saliva secreted by three large salivary glands and other smaller glands gets mixed with the food by the action of the tongue and the teeth. The food is acted upon mechanically by the teeth, grinding it and chemically by the salivary enzymes. The food is formed into a bolus and swallowed into the oesophagus. It moves down the oesophagus by peristalsis.
II. From oesophagus, the food enters into the stomach where it is acted upon by the enzymes (protease and renin) of the gastric juice. It is now called the chyme.
III. From the stomach, the chyme enters into the duodenum (of small intestine). Duodenum receives the bile juice and pancreatic juice. These secretions help to further digest the carbohydrates, fats and proteins. In ileum, the food is completely broken down into the simplest of forms – proteins into amino acids and carbohydrates into monosaccharides. This digested mass is now called the chyle and it is in liquid form.
IV. The intestinal walls of ileum absorb the nutrients and also water.
V. The undigested food then passes into the large intestine where it is temporarily stored. More water is absorbed from the waste matter to form solid faeces.
VI. The faeces are egested out of the anus by the movements of the colon.
VII. The food that is digested is absorbed into the blood and lymphatic systems which transport the food to all the cells of the body where they are assimilated and used as required.