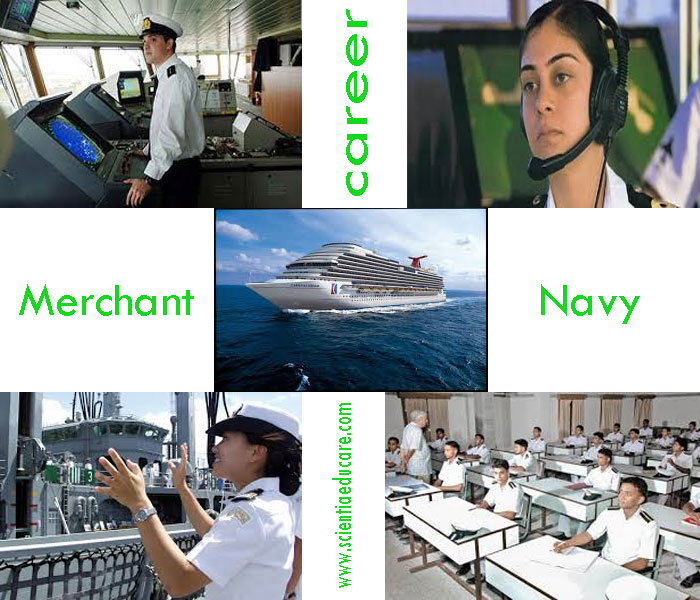 The merchant marine is another, non-combatant and essential service that can be very satisfying and certainly more monetarily rewarding.It came to existence as soon as men were able to build a craft that could float and carry people and cargo. The merchant ships employ a hugh number of workers to carry and deliver goods from one country to another. Merchant navy fleet consist of cargo ships, container ships, barge carrying ships, tankers, bulk carriers, refrigerators ships, passenger ships,as well as roll off/roll on ships.

Barge carrying ships are long, usually flat boats which are usually wed or manouvered by other towing vessels.

Bulk carriers- Cargo such as grain, oil, ore has lot of weight. Bulk carriers are so designed that they can enter shallow waters and narrow channels. they can be loaded and unloaded by special equipment in very short time.

Tankers are ships which carrys oil and other petroleum products in large tanks built inside the ship and VLCC’s are Very Large Carrying Containers.

Refrigerator ships are those type which have huge cold storage plants built in them . They are used to carry perishable food stuff and items on specific service routes.

The main functional areas where Merchant Marine can be pursued as career are as follows.

Deck / Navigation Officer Deck or navigation officer as the name suggest , are in charge of the navigation of the ship. The Captain or Master is in command of the ship. He is not only responsible for vessel navigation but also for the discipline on the ship and safety of passengers,crew,and the cargo. He is incharge for assigning organisational duties for ships operation, navigation and maintenance with the chief mate. The officer must ensure the observance of national and international codes of conduct guiding sea transportation. It is essential for the navigation officers to obtain a certificate of competency. He is assisted by chief mate also known as first mate who is incharge of the cargo planning and deck work. The second mate is in charge of mails, the maintenance of all equipment and charts used for navigation. The third mate is responsible for maintenance of lifeboats and firefighting equipment. He acts like a signal officer in charge of all signalling equipment and assists with cargo work.

Engineering Officers The ships engineers have complete responsibility of the ships engine room like the main engine, boilers, pumps hydraulic and fuel systems and the ships electrical generating plant and distribution system. the chief engineer is responsible for all machineries, equipments, auxillaries. the job demands maintaining of documents of working as well as repairing machinery.fuel consumption and requirment is to be logged. Second engineers are responsible for the maintenance of lubricating system, engine room auxillaries and electric equipments. The third engineer is responsible for fuel and water , supervises tank soundings, and logs the consumption of water and fuel. the boiler room equipment , the feed water system, pumps and condensers are monitored by him. The forth engineer is responsible for the operation and maintenanceof engine room auxillaries. Electrical officer maintain and repair all electrical circuits and motors.

Stewards/Service department This department is responsible for preparing of food and meals for the crew on board . they also maintain living quarters of the crew and the mess halls.The chief steward maintains inventories of food stuffs, linen, bedding, furniture, etc. The other staff are the chief cook, baker and attendants.

Merchant Navy Rating There are three kinds of ratings: deck rating, engine room rating and catering rating.
Deck rating is responsible for cleaning, sweeping, chipping of rust, polishing, etc. They help in loading and unloading of cargo and in port they assist in the mooring of the ship.

Engine room ratings are responsible for the day to day cleanliness of the engine room and for routine oiling, greasing, and servicing of machinery. as they experience they help officer monitor and ensure the safe running of main plant and ancillary equipment.

Catering rating – they usually clean accommodation areas and pulic rooms, helps in preparation of foods, clean galleys and cooking utensils, and to maintain fridges, freezers. They also serve meals to officers and crew and help in loading and storing of consumable stores.

The jobs call for genuine interest that can held the entrant adjust with ease and confidence. the ability to withstand long streches of hard work in an emergency like situation on board a vessel and to the physical strain, needs a person with touch mental and physical self to sustain through such stress. A person with a strong mental makeup and tough physical constitution along with a sporting adaptive and adjustable attitude can find at sea one of adventure and fun.Life at sea is not a comfortable break from the routine of academics. A merchant navy entrant must involve in a rigorous course of the on-the-job learning. they have to pass stipulated examination to get promotions.

Marine Engineering Research Institute : It was earlier known as the directorate of Marine Engineering, offers marine engineering education. Headquartered at Calcutta, it has a branch in mumbai too. Admission is open to both male and female candidates below 20 years of age. Candidates have to go a physical fitness test. Selection is based on the Joint Entrance Examination(JEE) conducted by the IIT. A merit list is prepared after the written test and interview. The director General of Shipping has the authority to which of the two training courses the candidate is best suited for after considering the preference of the student

Other Courses : There are other courses in this field like :
Rating Traning – There are three estb for training of ratings, T.S.Bhadra,Calcutta, T.S.Mekhala, Vishakapatnam and T.S.Navalakshi.The training course is of 3 months duration.

Training for Radio officers – Certificate of Competency Examination is conducted under the aegis of Wireless Advisor to the Govt.of India. A candidate wanting to become a marine radio offcer has to acquire his academic degree from any institution providing training in radio communication.

Post Sea training – Merchant Navy personnel have to clear examination to move on to the next position. This training is imparted at Lal Bahadur Shastri Nautical and engineering college, Hay Bunder Reay Road, Mumbai.

Specialization
Since there are different types of ships like passenger ships, tanker, Refrigerator, cargo ships etc. specialization depends on the type of vessel that one is working in or interested in working. For example Tanker safety course, courses for LNG amd LPG carriers. Officers who do these courses are better placed or gets better increment and also they have a sound knowledge of that particular type of vessels.
International Institute offering course are :
a) Association of Marine Electronics and Radio College(AMERC)
b) Glassglow College of Nautical Studies, Glassglow, U.K

The development of new technology and better equipment has led to increase in the shipping business. Therefore man power shortage in the marine professions has led many foreign and Indian shipping companies to recruit more and more people directly by putting advertisement in magezines like Sailor Today or through training institute. The nautical cadets has to undergo three years of job training at sea before the govt. allows them to to take the Second Mate’s exam.

Post retirement, these officers are in demand for consulting and advicing. Some even venture into allied fields like ship care and maintenance. Some may also take up a job on port or dock looking after the routine job like loading /unloading , clearing of goods from customs etc.

The employment opportunities in this profession are available in government and private shipping companies like Shipping Corp. of India Clearing Houses Delcredere agents etc.

Merchant Navy is one of the few careers where the salary is relatively high. It can range anywhere between Rs. 12000 to Rs.8 lakhs per month though the pay structure differ from company to company, city to city, the export-import needs, seniority etc. all crew and officers are given free meals on board and senior officers can take along their wives for the voyage. Usually emolument in a foriegn vessels are higher specially the West European, U.S and the Gulf.Every officer and crew of the merchant navy working on board a vessel which is carrying foreign cargo is entitled to 75% of his net earning in foreign exchange.Besides this , imported liquor, cigarettes, canned foods, cosmetics are available on board duty free.they are also entitled to four month leave every year.

Life in merchant navy can be adventurous for all those with wanderlust. the long period of solitude notwithstanding, the opportunity to see the world and get paid while doing so, just cannot be argued away.

Best Wishes From www.scientiaeducare.com
Helping you choose a successful career….