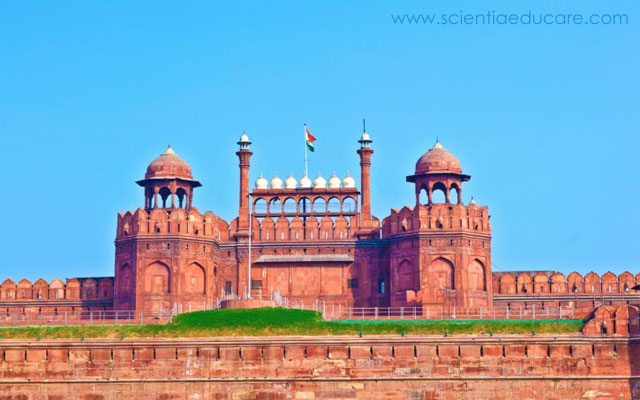 The Red Fort or Lal Quilla as the fort is popularly known as, situated in Delhi depicts the Mughal architectural brilliance. The 17 th century historical events come alive in the evenings at the fort with the sound and lights of the SonEt Lumiere . The Red Fort can be entered from both the Lahore and the Delhi gates. The Lahore gate being the principal gate connects the Red Fort and the Chatta Chawk Bazaar beaming with life.

History
The Red Fort in Delhi was built by Shah Jahan between 1638 and 1648. The red fort, created by Shah Jahan is the seventh Muslim city in the Delhi boundary. The Lal Quilla has witnessed the extravagant life styles of the royal families. In the later years the Red Fort suffered invasion in the hands of Nadir Shah and also the British government. Musicians of the royal court used to entertain the emperor and his guests at the Lal Quilla and many a promising youth had been crowned as an emperor or announced as a prince inside this fort.

Description
The red fort or the Lal Quilla has two gates opening into the city of Delhi. The Lahore gate is the primary entrance of the fort and it faces the city of Lahore which is now a part of Pakistan. The walls of the Red Fort are about 2 kilometers in length while the height varies from 18 meters.to 33 meters.

The fort is divided into several parts and named according to their functions. It has the ‘ Diwan-i-am’ i.e. the public audience where the emperor held meetings with the public and his private meetings were conducted in the ‘ diwan-i-khas’ .

The Palace of Colors or the ‘ Rang Mahal ‘ was meant to be the private quarters of the emperor’s wives and mistresses. It contains a magnificent piece of art in a lotus carved from a single piece of marble. The hall is adorned with mirrors and beautiful paintings. The ‘ Mumtaz Mahal’ has now been turned into a museum.

The fort also houses the Turkish styled baths known as the ‘Hamams’ and Shah Jahan’s private working area known as the ‘ Shah Burj’ . The royal chambers or the ‘Khas Mahal’ is another tourist attraction. A courtyard specially designed for the musicians adds to the grandeur of the fort. Later, Aurangzeb had extended the Fort with the Pearl Mosque or the ‘Moti Mashjid’.

How to get there
Conducted tour of the Red Fort is available at selected hotels in Delhi. The Red Fort can also be reached by buses and taxis plying in the city.

The Hornbill Festival: Places to visit in north east India

A peek into tribal life at Touphema Village