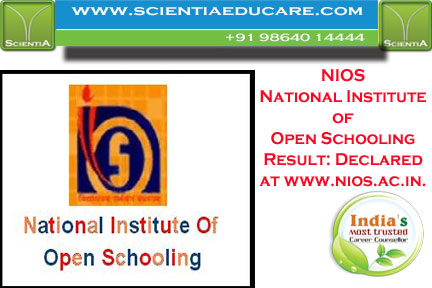 The National Institute of Open Schooling (NIOS) has declared the Secondary Board exam results today. The results can be viewed at the official site of the board, www.nios.ac.in.

Almost 35,000 students from Uttarakhand and Western Uttar Pradesh appeared for the NIOS class 10 and class 12 exam. This year, 104 centres were identified to conduct the examinations.

The students who appeared for the exams could check their results in the following steps:

Go to the official website of NIOS
Click on the link ‘Secondary Examination Results Declared’
Enter your roll number
Click on ‘Submit’
The results will be available online and can be downloaded for reference, too.

The National Institute of Open Schooling (NIOS) was earlier known as National Open School (NOS) and was established in November 1989 as an autonomous organisation by the Ministry of Human Resource Development (MHRD), Government of India.

In 1986, the National Policy on Education suggested strengthening of Open School System for extending open learning facilities in a phased manner at secondary level all over the country as an independent system with its own curriculum and examination leading to certification. Hence, the open school was established in 1989 for the promotion and development of secondary education in the country.