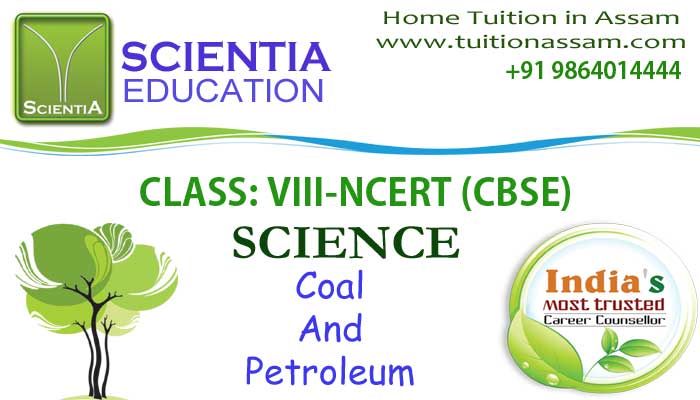 Many industries, like fishing, mining, hunting, agriculture and forestry, revolve around the sensible use of natural resources.

Natural resources are classified as renewable and non-renewable resources.

Non-renewable resources are those that are limited in nature and will not replace themselves.
They can be exhausted by human activities.
As they are limited, they are also called exhaustible resources.

Coal, petroleum and natural gas are exhaustible fossil fuels, which cannot be prepared in the laboratory. It takes millions of years for dead organisms to get converted into these fuels.

Studies show that the known reserves of these fuels are fast depleting.
Burning of these fuels is also a major cause for air pollution and, along with cutting down of trees, is contributing to global warming.

The Petroleum Conservation Research Association (PCRA) of India has some tips for people on how to save petrol/ diesel while driving:
• Drive vehicles at a constant and moderate speed.
• While waiting or at a traffic junction, switch off the engine.
• Ensure correct tyre pressure.
• Ensure regular maintenance checks of the vehicle.

Tips for conserving energy at home and school:
• Switch off lights and electrical appliances when not in use.
• Turn off air conditioning when leaving the room.
• Do not let the tap run while you brush your teeth orsoap your hands.
• Check all leaky taps.
• Take shorter showers.
• Buy rechargeable batteries and a charger for them.
• Avoid plastic bags.
• Recycle your newspapers.

Coal
During the carboniferous age, the earth had large amounts of plant life and dense forests in swampy andlow-lying wetland areas. Plants and other life forms,after their death, drifted down to the bottom of the swamps, where they were compressed anddecomposed to form peat. Coal was formed due to thecompression of the peat at high temperature and pressure.
As coal was formed from the remains of vegetation, it is called a fossil fuel.

Carbonisation is the slow process of conversion of dead vegetation into coal.
Coal is primarily made up of carbon, also hydrogen,oxygen, nitrogen and some amounts of sulphur.
Surface mining is used when coal is found close to thesurface or hillsides. Underground mining is used toextract coal that is deep beneath the surface of the earth.

Coal is processed in the industry to get useful productscoke, coal tar and coal gas. Coke is an almost pure form of carbon that is used in the manufacture of steeland extraction of metals.
Coal tar is a black, thick mixture of almost 200 substances. It is used as a starting material formanufacturing synthetic dyes, explosives, perfumes,drugs and plastics, synthetic resins, paints andstains.
Naphthalene balls, which are used to repel moths and other insects, are also obtained from coal tar.
Bitumen, a petroleum product, is now used in place ofcoal tar for surfacing roads.
Coal gas is obtained during the processing of coal to get coke. It is mainly used as a fuel in industries around coal processing plants.

Uses of coal:
• Coal is the largest source of fuel used to generate electricity world-wide.
• Coal is used in manufacturing industries for heat andpower applications.
• Coal is used to make steam for heating.
• It is also used as coke in steel making.

Oil in India is found in Assam, Gujarat and Mumbai High, and in the river basins of Godavari and Krishna.
Petroleum is a mixture of various constituents likepetroleum gas, petrol, diesel, lubricating oil, paraffin wax, etc., and the process of separating its many constituents is called refining. It is refined in apetroleum refinery.
At the refinery, the crude oil mixture is ‘fractionated’ into different components by fractional distillation.
Light gases are the topmost fraction, followed by petroland kerosene. Diesel is the heaviest. The other heavier fractions are not useful and are usually used to makeasphalt to surface roads.

Simple steps to reduce consumption of petrol/diesel:
• Use public transport.
• Combine many errands into one trip.
• Car pooling to school and work.
Burning petroleum releases carbon dioxide into the air, which contributes to global warming.
Oil spills at sea are devastating to the animal and plant life in and around the sea.

Natural Gases
Natural gas is another fossil fuel, like coal andpetroleum. It is a non-renewable fuel.
Natural gas is used for waste treatment andincineration. Gases like butane, ethane and propanemay be extracted from it and used as feedstock forproducts such as fertilisers and pharmaceutical products
Natural gas is one of the most useful, clean and safe energy sources.
It is a colourless and odourless gas in its pure form, and is made up of many gases, of which methane is the most prominent. The chemical formula for methane is CH4.
When natural gas burns, it gives off a great deal ofenergy, and unlike other fossil fuels, leaves no ash. It causes very little air pollution, as methane burns almost completely.
It is one of the cleanest burning fuels and produces mostly heat, carbon dioxide and water vapour. Thus, it is said that it contributes to a cleaner and greener environment.
Natural gas is odourless. To detect gas leaks, aharmless but pungent odorant that smells like rotten eggs is added to it, as a safety measure. It can be smeltin case of even a small leak.
Natural gas is measured in British Thermal Units (BTU).

Uses of natural gas:
For cooking.
To run central heating and cooling systems, and cloth dryers.
For electricity generation through the use of gas turbines and steam turbines.
In the manufacture of fabrics, glass, steel, plastics, paint and other products.
Natural gas is compressed to a high pressure and stored in hard cylindrical or spherical containers, for distribution. It is then known as Compressed Natural Gas or CNG.
CNG is also distributed to homes and industries throughpipes, For example, in India, such a network of pipelines exists in Vadodara in Gujarat and some parts of Delhi. CNG is now used as a fuel for transport vehicles – from light duty trucks, auto rickshaws andtaxi cabs to delivery vans and heavy duty vehicles likebuses.