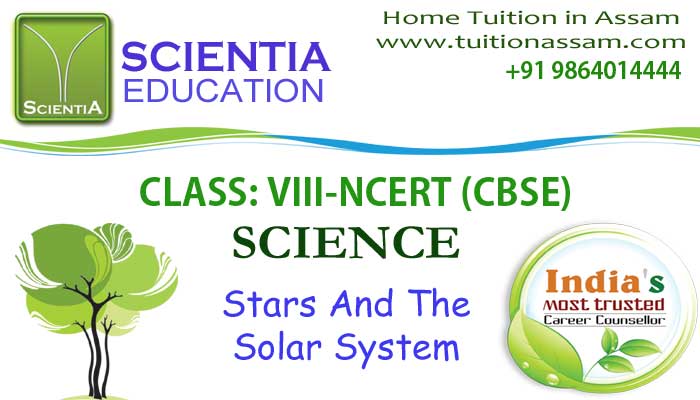 The moon is a natural satellite of the earth, and it reflects the sunlight incident on it. Due to its revolution around the earth, when it is at different positions in its path, the apparent disc of the moon changes, which gives rise to its phases.

The duration from one new moon day to the succeeding new moon day is the lunar month. If the moon is observed closely, we find craters, depressions on the surface of the moon, which might have been formed by the collision of some heavenly body like a meteorite with the moon. Even before astronauts landed on the moon, we were able to find information about the universe by celestial objects like meteorites.

Meteors are dust-like material, which vary from a small pebble to a big boulder of several hundred kilometre in size, from outer space that enters the earth’s atmosphere. Due to friction between the meteor and the atmosphere, the meteor may get burnt while reaching the surface of the earth. If the size of the meteor is large, a lump of it may be left without getting destroyed in the course of reaching the earth. This part of the meteor is called a meteorite.

The huge distances between the earth and other celestial bodies are measured in light years. A light yearis the distance covered by light in one year.

The sun is a major source of heat and light for all the planets in the solar system. Planets reflect sunlight that is incident on them. They have no light of their own, so they don’t twinkle like the stars. Planets have definite paths called orbits in which they revolve around the sun. The time taken by a planet to complete one full revolution around the sun is called its period of revolution. The time taken by a planet to rotate a full 360 degrees on its axis is called its period of rotation.

Jupiter’s four larger moons are called Io, Europa, Callisto and Ganymede. It rotates the fastest among all planets. The rings of Saturn are made of ice particles and dust. Saturn is the only planet that is lighter than water. The largest of Saturn’s moons is Titan. Uranus is the coldest planet. Neptune was discovered through mathematical calculation. Mercury, Venus, Earth and Mars are called the inner planets. Jupiter, Saturn, Uranus and Neptune are called the outer planets. The outer planets have several moons and a system of rings.

Other Members of Solar System

Apart from the sun and the planets, the solar systemalso consists of celestial bodies such as meteors, comets and artificial satellites. A meteor is made up of debris. A meteor enters the Earth’s atmosphere at a very high speed. The friction with the atmosphere makes the meteor hot and it burns till it disintegrates. As it falls to the ground, it glows brightly. This is why it is called ashooting star.

Some meteors reach the ground before they burn completely and evaporate. These are calledmeteorites. Asteroids are made of rubble and are found in the gap between the orbits of Jupiter and Mars. This gap is called the asteroid belt.

An asteroid does not have a tail. However, a comet is made up of a bright head and a long tail. A comet consists of rock, dust, water, ice and frozen gases. Comets, too, revolve around the sun periodically, but their period of revolution is larger as compared to that of planets. One of the most famous comets is Halley’s comet, named after the discoverer. Its period of revolution is 76 earth years.

Stars are always fascinating to mankind. They are the most beautiful celestial bodies about which mankind contemplates. In ancient times, the revolution of the earth around the sun and the apparent position of many groups of stars were studied extensively to explore the universe. A group of stars that can be identified with the shape of an identifiable object like an animal or a known object is called a constellation. Major constellations are the Ursa Major, Ursa Minor and Cassiopeia.

In India, it is popularly called the Saptarshi. Another popular constellation is the Orion, which is shaped in the form of a hunter. Three middle stars in the Orion lead to a brighter star in the sky, called Sirius. The Cassiopeia is another constellation, which can be located in the northern sky.