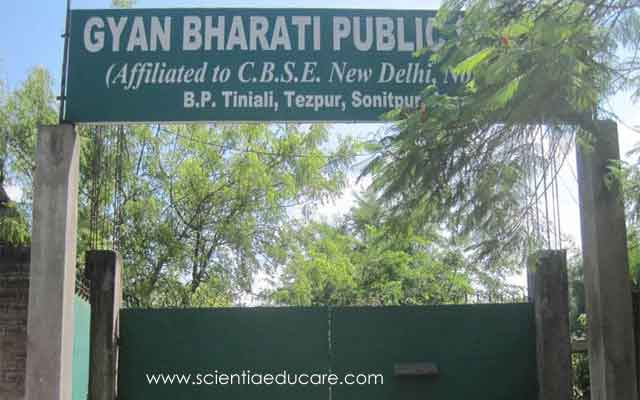 Gyan Bharti Academy is a Co-Educational school affiliated to CBSE syllabus. Gyan Bharti Academy is located in Sonitpur,Assam. The school was established in the year 1995 and is managed by Bikramadia Educational Foundation.
Under the guidance of Bikramaditya Educational Foundation, a registered Trust with Assam Government, under Registration of Societies Act XXI of 1860, Gyan Bharati Academy, was born as a Pre-Primary, co-educational English medium school, at the private residence of the Director, Bankim Baruah, at Swahid Bakori, Tezpur in April 2001. The school continued to function at Swahid Bakori campus till March 2005. In April 2006 it was shifted to its permanent location at B.P.Tiniali, Tezpur, which is at a walking distance from National Highway – 37. It’s a pollution-free, beautiful lush green campus of 18 bighas of land, with trees all around. The school started with a total enrolment of only 14 students in its first academic session. Today Gyan Bharati Academy, Tezpur can boast of a strength of more than 800+ students with a team of well-experienced and dedicated 40 faculty members. Gyan Bharati Academy, Tezpur got its affiliation to the Central Board of Secondary Education, New Delhi, in the year 2008, vide affiliation no. 230061. Till time, four number of batches have appeared for Class-X Board Examination, and it deserves a mention that all the four batches have come out with flying colours with cent percent results.