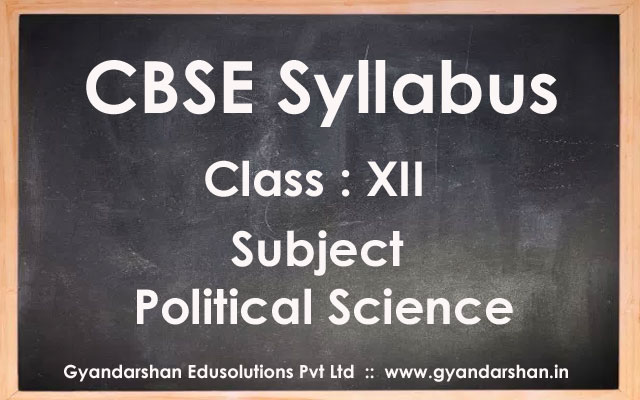 Part B: Politics in India since Independence

2. The End of Bipolarity

3. US Hegemony in World Politics

Growth of unilateralism: Afghanistan, first Gulf War, response to 9/11 and attack on Iraq. Dominance and challenge to the US in economy and ideology. India’s renegotiation of its relationship with the USA.

Rise of China as an economic power in post-Maoera, creation and expansion of European Union, ASEAN. India’s changing relations with China.

Democratisation in Pakistan and Nepal. Ethnic conflict in Sri Lanka, Impact of economic globalization on the region. Conflicts and efforts for peace in South Asia. India’s relations with its neighbours.

Restructuring and the future of the UN. India’s position in the restructured UN. Rise of new international actors: new international economic organisations, NGOs. How democratic and accountable are the new institutions of global governance?

Traditional concerns of security and politics of disarmament. Non-traditional or human security: global poverty, health and education. Issues of human rights and migration.

Economic, cultural and political manifestations. Debates on the nature of consequences of globalisation. Anti-globalisation movements. India as an arena of globalization and struggle against it.

Part B: Politics in India since Independence

Nehru’s approach to nation-building; Legacy of partition: challenge of ‘refugee’ resettlement, the Kashmir problem. Organisation and reorganization of states; Political conflicts over language.

14. Challenges to the Congress System

15. Crisis of the Democratic Order

Search for ‘committed’ bureaucracy and judiciary. Navnirman movement in Gujarat and the Bihar movement. Emergency: context, constitutional and extra-constitutional dimensions, resistance to emergency. 1977 elections and the formation of Janata Party. Rise of civil liberties organisations.

Rise of regional parties. Punjab crisis and the anti Sikh riots of 1984. The Kashmir situation. Challenges and responses in the North East.