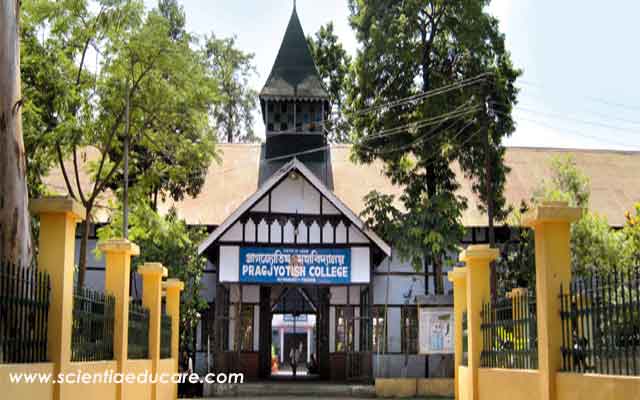 Pragjyotish College was established on 1st of September 1954. Eminent scholar and litterateur Pandit Tirthanath Sarma was its founder principal. From its modest inception as an Arts college, Pragjyotish College has now developed into its present stature of a famous full-fledged Degree College, imparting higher education in Arts, Science and Commerce streams. The college also has two post-graduate departments, viz. Assamese and Tourism Management. It is affiliated to the Gauhati University and registered under 2(F) and 12 (B) of the University Grants Commission Act, 1956. The college has the distinction of being assessed and accredited by the NAAC twice in 2003 and 2010 respectively and was placed in “Grade B in a Four-point scale”, valid up to 2016. The college has done excellent pioneering work in different branches of education. It has generated talents for pursuit of truth, creation, and dissemination of knowledge, and has drawn students from all over the North-east and neighbouring states. The college has inspired innumerable and countless teachers, students and educationists, who have left an indelible mark in the educational scenario of this region. Pragjyotish College is proud to be the ‘grooming ground’ for several eminent personalities in the field of politics, academics, medicine, engineering, beauracracy, judiciary, etc. The college has celebrated its golden jubilee in the year 2004 with a long and continuous programme, spanning for five years.The college has developed its own unique philosophy and vision, mission and programmes of action.